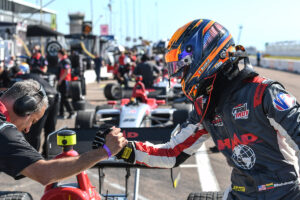 HMD Motorsports is excited to officially announce that David Malukas will be making a return to the Indy Lights Presented by Cooper Tires field for the upcoming 2021 season. With no surprise of his confirmation, Malukas will join the already confirmed Global Racing Group with HMD Motorsports entry of Benjamin Pedersen.

“I am really excited for the 2021 season to be back in the Road to Indy,” expressed David Malukas. “2020 started off well with the quickest lap of the only practice session at St. Pete but COVID had different plans for our season. Definitely missed being at events with IndyCar, and we have our goals set high for 2021.”

No stranger to the Road to Indy, Malukas has quickly worked his way up the ladder program over the past four years. After making his debut in USF2000 in 2017 for a partial season, Malukas moved up to Indy Pro 2000 the following year, where he finished fourth in the championship and claimed three wins. For the 2019 season, Malukas moved up in the program again for his rookie Indy Lights season where he earned two podiums and six top-five finishes.

Malukas was set to return to Indy Lights for the 2020 season. However, after the forced cancellation of the 2020 season, the Chicago area resident and HMD Motorsports made the switch to Formula Regional Americas Powered by Honda – where he finished second in the championship with two wins and fifteen podium finishes

Coming in to the 2020 season strong, Malukas and HMD Motorsports topped the charts in the one and only practice session for Indy Lights in 2020 at the Grand Prix of St. Petersburg before the season was cancelled due to COVID-19, and they expected the momentum and success to continue through the season. While the cancellation of the 2020 Indy Lights season was not ideal, the off year gave Malukas and the newly revamped crew an opportunity to settle in together and form a strong team making them even more prepared for the upcoming Indy Lights season.

Malukas will return to his #79 HMD Motorsports entry for the 2021 season.